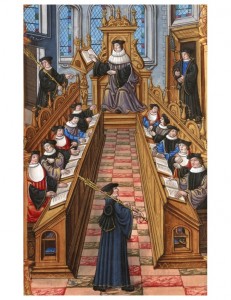 University life is about teaching and research, a continuous stream of young people and fresh ideas. It is an age-old format that started in the Middle Ages, such as the Jagiellonian University in Kraków in 1364, the closest one to Russia at that time, and its essence has carried on into the present day.

At a modern university you will find researchers and students. They work together on new topics, write new articles, prepare lectures and talks, seek potential users and train for future jobs.

In our research group we like to do research on superconductors, nanotechnology and photons. We address condensed matter physics, interaction with radiation, and fabrication on a nanoscale.

Our laboratory started on June 26th, 2013. It is the result of a Grant from the Ministry of Science and Education of Russia given to the Dutch professor Teunis M. Klapwijk, for a period of 3 years. Throughout his career he has been a heavy user of an enormously long list of theoretical contributions on superconductivity from Russia. He is also very much interested in the evolution in various countries towards a healthy and stimulating academic life. Russia is a country in an interesting phase of development and it is fascinating to contribute to such a  changing system. 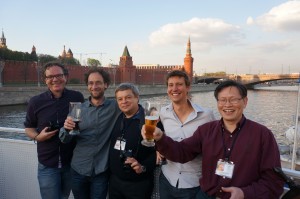 A meeting of doctors on the river in Moscow on April 29th, 2014 to discuss Space THz technology

However, 3 years on a part-time basis is a short period. And a Dutch-language novelist wrote: “between dream and action we find in our way laws and practical objections”. Why would this only be true at the North Sea?

The main message is, we welcome physics students from MSPU, as well as from the Moscow Institute of Electronics and Mathematics (part of the National research University Higher School of Economics) to join our ranks for research as a BSc, a MSc or a PhD student. Others are welcome too.